Belief is the software of man.
We cannot see it.
What we can see however, are it’s effects. 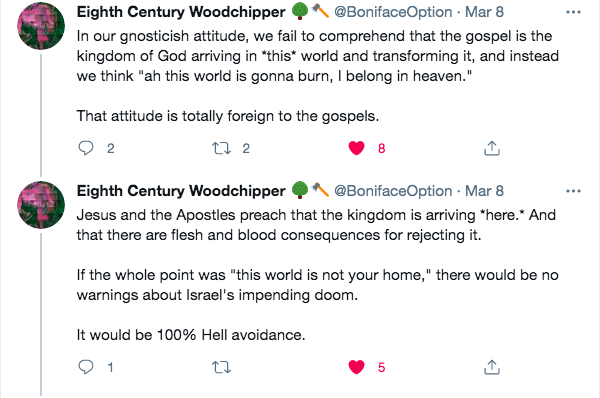 Which of these two softwares we choose to run, determines the effectiveness of our hardware.
We cannot see a man’s identity. But we can see the effects of his identity on his environment.

Kingdom Now:
The Church is the forward operating base of a Warrior King, encroaching into enemy held territory and capturing enemy operatives and institutions.

Kingdom Later:
The Church is a destitute family waiting for its husband to come back and pluck them out of their misery.

Kingdom Now:
Christians are the sons of a Good Father. Christians are the kings that Jesus is king of.
“It is better that I go… I will send you a Helper.” He already saved us, now we have a commission to fulfill. “Go therefore… and I am with you always!”

Kingdom Later:
Christians are orphans of an uninvolved father. Christians are the slaves of a helicopter king.
“Jesus please come back and save me! Just gonna bury my talent and hunker down for the rapture/return…” Helplessness & victimhood are the indications of slavery.

KingdomNow:
The Church is offensive, not defensive.
It is advancing, not retreating. Encountering opposition means you are finally in the game, finally heading towards the goal posts!

Kingdom Later:
The Church is passive.
It is waiting for an end to the suffering. I don’t want to play, I might get hurt or dirty or look stupid.

Kingdom Now:
The Church recruits, trains, and deploys son-kings to take and extend the King’s dominion.
The weapons of their warfare: Humility and Fear of the Lord. Identity and Purpose. Fearlessness and Integrity. Wisdom and Economy.

Kingdom Later:
The Church pacifies and softens strong men to stop them from picking fights with evil, to keep the ox-barn clean.
The weapons of their pacification: Fear of Women. Fear of Death. Kindness. Obesity. Shame.

Its always easier to do nothing, say nothing, be nothing, to save your own life.
But a king is not for long life. A king is for glory!

Many sincere christian boys have gone to the military because the church had no vision for them, no plan for them.

Not anymore. A new software is downloading…

Here is a practical gameplan for taking and extending Dominion.